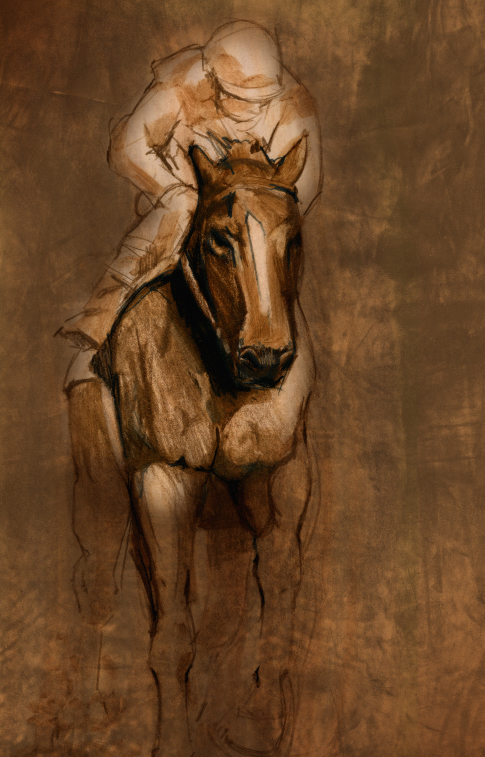 I grew up around horses and other animals, and I began thinking about the deep connections between people and animals as a child. Growing up in rural Oklahoma, it was impossible to escape the lives and deaths of the animals who surrounded me. I watched how they played, struggled, loved, and grieved. I saw how they suffered, and it was difficult to distinguish their suffering from the human suffering I learned about through my politically active parents.

Today, as a physician, my professional expertise spans the fields of medicine, ethics, human rights, and animal protection. My personal and professional experiences have driven me to consider the root causes of vulnerability and the ways in which the needs of people and animals intersect.

American Pharoah’s race to the finish line at the Belmont Stakes was covered by every form of media – from newspapers to broadcast television stations to online magazines and popular blogs. But almost no one covered the suffering horses endure as a result of their use in racing.

Horses used in racing are bred, taken from their friends and families, abused, trafficked, and killed – on and off the track.

Jockeys are also at tremendous risk – though they have the choice of whether or not to participate in racing.

Despite existing rules and regulations, horses used in racing are pumped full of steroids, stimulants, and painkillers. They are whipped repeatedly and forced to move in ways that are unnatural and against their will.

Horses are forced to run around tracks made of hard-packed dirt at speeds that exceed 30 miles per hour – all while their small ankles support a typical weight of a thousand pounds.

On average, 24 horses die each week at racetracks across America. Their bodies are shipped to rendering plants or landfills, their lives and deaths left unexamined.

And many other horses’ lives end at a slaughterhouse, where their spent bodies are turned into glue or meat for humans and dogs – but only after they are packed and trafficked in cramped trailers with limited access to water, food, and care.

“It’s hard to watch these poor animals running for their lives for people who could really care less if they live.”

But problems with horse racing extend far beyond being deprived of food and water and being pushed beyond their physical limits. They are kept from having normal relationships with other horses, deprived of respect for their autonomy and dignity, and robbed of pursuing a species-typical life.

Like so many other nonhuman animals, these horses are bound by the unnatural order of dominionism many humans think they are due – the same dominionism that has been used to justify racism, human slavery, and the subjugation of women. Where power is king, use is abuse, and ignorance is bliss.

And all for what? For the momentary pleasure of many, and to line the pockets of a few millionaires and billionaires?